Paper.io is a great online game in which you have to direct a small paper square across the gameboard, in an attempt to cover the maximum amount of space and emerge a winner in the end. This might look like a simple game, but the fact that it is a multiplayer game makes it more complicated. Paper.io for iPad is the iOS version of the game, just like Paper.io APK is for Android-based devices.

How to Play Paper.io for iPad?

Paper.io game is a mix of Splix.io and Slither.io classic io games in general. Players love to play this amazing io game. Many players prefer to play this game from every platform in order to be the first in this game. Some of these platforms are mobile, tablet, and computer.

Generally, you should take small bites. You should not go away much from the home base – particularly if you find adversaries roaming in your territory. Try to bite small shaped lands from their areas, and often come back to your home base. This will help you to earn points consistently and take small pieces from the competitors even if there is an enemy base close by.

This is an important and safe technique in Paper.io for iPad. This is because when you are not in your home territory, other players can easily bump into your tail and lead to your death. But if you stay near the base, it will be easier for you to take refuge when you see adversaries coming towards you. You may also use it as a trap, attracting them to your base and finishing them off one by one. Once they are well within your land, a collision would make them die while you can escape unhurt from the melee.

You have to watch out for enemy lines constantly, as you play Paper.io for iPad. When you are out in the unconquered spots of the gaming map – the white areas or “neutral areas”, you might see the tail of an enemy. As long as the enemy itself cannot be seen, it is okay to try and bump into the tail as fast as possible. If you manage to do that, you will immediately be able to kill your opponent and score bonus points.

How to get iPad Paper.io?

Paper.io for iPad is easily available on the iTunes store, and you can also download the application file for the game for iPad from other websites and gaming blogs online. A simple search online can be enough for you to find this game for iOS devices. It is really easy to download, install, and start playing this game on the iPad. Check your system version and compatibility before you download any of the application files onto your device.

To beat other players in the game, you must enter the game by evaluating your iPad’s screen brightness and battery power well. With a low screen brightness, you may be less likely to see dark enemies’ moves. If you get tired of playing Paper.io on your iPad, you can check out your Paper.io alternative games. 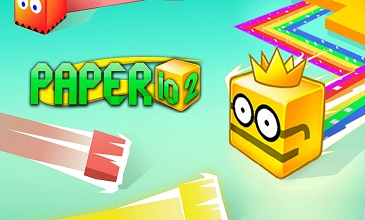