Paper.io is a multiplayer IO game that can be played online, or even downloaded free of cost and played offline. This game is a space capture and protection game with your snake. It is very convenient to play it, given that you can get more space, rank higher, and be able to have more scores. You need to think and act very fast, develop your plan of action and strategies to win this game. You can play the Paper.io game from anywhere – home, office, campus, or even while on the move.

What are You Supposed to Do in Paper.io Game?

Keep in mind that the rules of the game are quite simple, but it is the simplicity of the Paper.io game that makes it extremely addictive. That said, while the game might appear to be simple at the outset, it can be a little tough to master. You have to stay on guard as you play the game and watch your tail. If an opponent touches it, you will drop dead. You have to ensure that your territory does not come under attack.

In this game, your main aim is to seize the largest amount of territory. You have to move around draw a line and then close it to grab the land which has been encircled. You can steal other players’ territory and then cross over to kill all of them.

In the Paper.io game, you have to claim as many areas as you can on a playing field.

You will leave behind a colored trail and move your character. You have to close your trail’s mainline to circle the whole region inside the boundary.

Don’t let your enemies see you. When they approach you, pretend you haven’t seen them, head towards a different area. So your opponent will underestimate you and stop adjusting for you. When the opponent feels comfortable, it will be easier for you to take over all the regions behind him.

When you leave the spot that you are laying a claim on, you are going to be killed in case some other player enters your track prior to the closure of the outline. In the same way, you may kill other players. This makes the game one of risks and rewards. You have to claim that you are in a neutral spot or get brave and attack your adversaries by stealth.

When you play the Paper.io 3D game, you can be assured of a new graphics and gaming experience. This is a simple IO game where you will be introduced to a whole new world of graphics. The game comes from Voodoo, which has been behind other fantastic and popular games like Bool, Snake VS Block, Helix Jump, Quiz Run, etc in the past. Sometimes error occurs in the Paper.io game and players call this error as Paper.io bug. 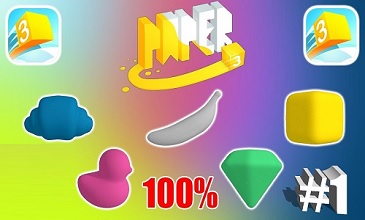 What Is Paper.io Mods Extension?