Paper.io is a competitive multiplayer game where you have to rush to conquer new territories all over the gaming map. Developed by creator Voodoo, this IO game has been inspired by the likes of Slithe.io. The game can be played on iOS and Android tablets or smartphones. If you are looking for a game played online and this is going to be an io game. Then, the Paper.io game is a really good choice, but if you are in search of Paper.io alternative, we can offer many different game suggestions.

Which is the Best Paper.io Alternative to Try Out?

IO game world is really a huge and unlimited game world. The main subject of IO games is the ability to play online and without downloading. You can easily play these games on your computer with your internet browser without any download. There are a lot of Paper.io unblocked alternatives on the Internet. We will explain the best Paper.io alternative games below.

This is a web-based multiplayer game, and its concept is a combination of those of Agar.io and Snake.io. You can have other players bump into you, and attempt to become bigger in size. You are supposed to kill the adversaries and make attempts to grab the maximum possible territories. The game playing might be similar although the aim is different.

It is among the most addictive games that you can find today. You grow your character by eating different kinds of confectionery, cake, and cake style foods in the game map. When you are big enough, you can make effective attacks against other players. When you block a worm, you can kill it and eat all the food that falls from the enemy. The game is awesome to play and can be one of the best Paperio alternative games for you to play.

Wormax.io is a modern remake of the traditional Snake game. You have to become bigger and bigger in size. Wormax.io is a game where the graphics and game style of the Slither.io game are presented. It is very similar to Slither.io and Wormate.io games. If you like playing these 2 games, you will love the Wormax.io game.

Paper.io is one of the first io games to inspire your game. It can be said to be almost the same as paper.io as game structure. If you are playing well in Paper.io, you are very likely to play well in Splix.io. Rich graphics, a challenging environment, and nice sounds make this game a great Paper.io alternative.

It is a classic game designed for a new gamer generation. You have to gobble the maximum possible colored dots to grow your hungry snake. This is a multiplayer game and the concept is a merger of those of many other IO games, which can lead to an overwhelming experience in gaming for you.

When it comes to Paper.io alternative, each of these games can be a good choice for you to play. These can be played on mobile devices or tablets, which means that you can play it anywhere and at any time that you want. Most of these are free to play, and you can enjoy them at no cost.

What Is Paper.io Mods Extension? 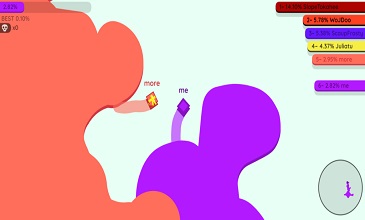